Our stop at the second Thompson Island was our turning point for our 2018 Lake Superior excursion and when we started our return trip back across Lake Superior. This will be the condensed version as the return trip was a series of hurry up, wait, hurry up, rinse, repeat.

We met up with Kevin and Kathy Crothers, who were on their Tartan 40 s/v Legacy, for our trek across Lake Superior. We figured it was a good stretch to have a buddy boat and I had visions of Dan and Kevin playing music via the VHF (blues harp and guitar respectively). Perhaps not the most appropriate use of the VHF and someone had apparently left the guitar behind.

We left Thompson (the Isle Royale Thompson) just before 1PM and headed for Stockton Island in the Apostle Islands, some 80 nautical miles across Gitchee Gumee. We estimated it would take us around 11-12 hours based on our normal cruising speed six and a half knots. Less if we had winds in our favor. As it turned out our time estimate was woefully optimistic. There was little to no wind and Legacy had prop issues preventing her from going much over four knots. Being a proper buddy boat, we were not about to leave them in our wake. Quite considerate of us since the crew of Legacy once made derogatory comments about the weight of our little girl. They should know better!

Before the sun set, we heard an unusual noise (sailors are ever so sensitive to weird noises). It was a repetitious thwap, thwap, thwap. Dan immediately checked it out and discovered that one of the alternator belts was fraying – hence the thwapping. We shut down the engine, hailed our buddy boat but told them to keep going and went into full pit-stop mode: NASCAR time. We should’ve gotten the trophy! For once, we knew where the parts were, the tools needed and what to do. Another legacy of Dan’s childhood farming/ranching life. We were back up and running in less than 20 minutes. That included replacing two belts on the alternator! Team Gaviidae for the win!

We caught up with Legacy and proceeded on into the night. Let me repeat: we proceeded on into the night. We finally dropped anchor in Julian Bay at Stockton just after 4AM. Anchoring in the dark can be a bit of an adventure, but we had advance information from s/v Mirage who had heard our VHF chatter shortly after sunset even though they were 45NM ahead of us! They relayed their position at Stockton and gave us a good idea where our two boats could drop anchor and not interfere with the other boats already there.

The next morning, we dragged ourselves out of bed and headed into Port Superior Marina in Pikes Bay near Bayfield, Wisconsin. We were returning to our starting point, albeit on a different Gozzard named Gaviidae. Our arrival coincided with the start of the Great Lakes Cruising Club Lake Superior Rally. It was a weekend of fun, seeing our Lake Superior sailing friends, and eating/drinking far too much!

When we had our boat in the Bayfield area, we did very little exploring of the Apostle Islands – we were always heading to distant shores. With a little extra time, we set out for Rocky Island and then to Raspberry Island where we had a delightful tour of the lighthouse. With winds in our favor, we had a lovely sail back to Madeline Island where we had an appointment with a mechanic to check a few minor issues we were having.

We enjoyed a last night on Madeline with friends Dewey, Mar, Kevin and Kathy – Dan made a lamb stew. Yum. We set off at 6AM the next morning, heading for the Keweenaw Peninsula. With nasty weather approaching, we bailed and went into Ontonagon, Michigan where we joined a fleet of fishing boats also seeking refuge.  This was the first of many encounters with bad weather over the course of the next week.

The weather forecast was for more storms the next day but we had enough of a window to head out the in the morning. We motor sailed the 40NM to Oskar Bay along the Keweenaw Waterway. With big storms predicted, we put out extra chain when we anchored into a southerly breeze. The storms came as promised, roaring out of the northwest–90 degrees from the direction that we anchored. With skies going jet black, the boat lurched, swung, lurched and swung again as the advance winds hit us broadside.

The noise of the wind was phenomenal and like any well-trained Midwesterner – I headed for the basement. Translation – I curled up in a ball in the aft cabin figuring that if a tornado hit us, I wouldn’t have far to fly.

Scared? Hell Yes! Dan clearly did not have the same sense and stayed in the cockpit the entire time – in case he needed to fire up the engine to hold our position. The anenometer (wind speed indicator) at the top of our mast clocked sustained winds above 30 knots for about three hours with gusts well into the 40s.

Throughout the three-hour storm, our friend Dewey who was still at Madeline Island, was sending me text messages about the next “wave” that was heading our way. It was comforting to know that someone was watching us from afar.

It turns out that we had someone watching us much closer, actually on shore. I learned this a few days later when I was looking at the MarineTraffic app to see whether Gaviidae was broadcasting on AIS (Automatic Identification System) – she was. Someone had posted a picture of her in Keweenaw! With a little research I found out it was a gentleman on shore who takes a picture of every boat on AIS that does not have an image. He then he adds his picture to their profile. We exchanged messages and he indicated that he had been watching our lights through the storm and knew we were okay. The storm did manage to rip our welded flag holder off the stern. Found it the next morning in the dinghy as it was leashed to the dinghy davits with a cord.

BTW – a tornado touched down about two miles from where we were anchored.

Over the course of the next week we continued eastward dodging storms along the southern shore of Lake Superior with stops in:

Little Lake (next to the Big Lake)

Little Lake is just that. A tiny lake that is connected to Lake Superior via a short channel that frequently shoals over. It had been dredged in the spring and another sailor cruising ahead of us radioed that he had successfully gotten through the channel. We did as well and spent a lovely three nights tucked in a very secure anchorage while Mother Superior stirred up the water on the big lake. 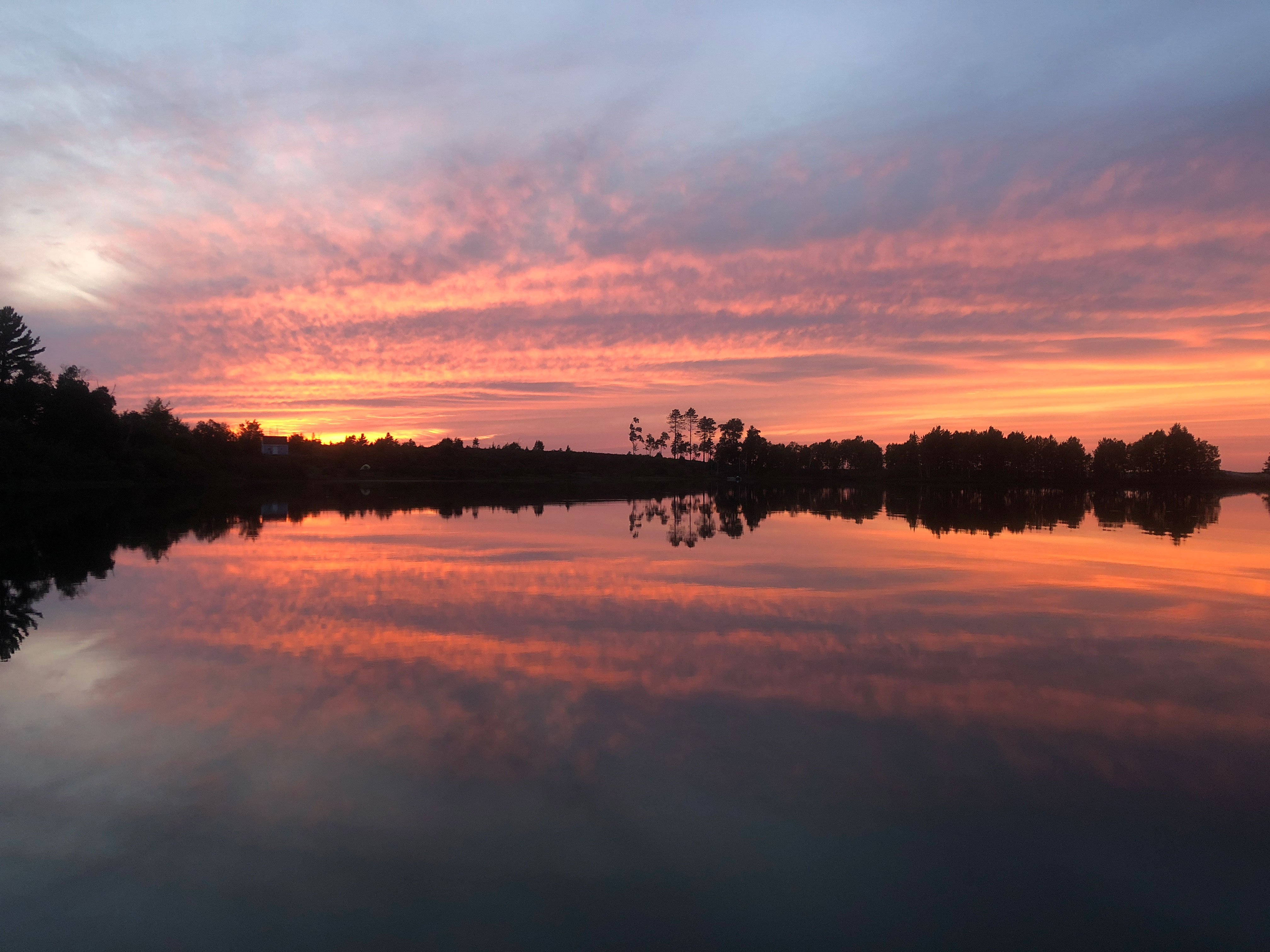 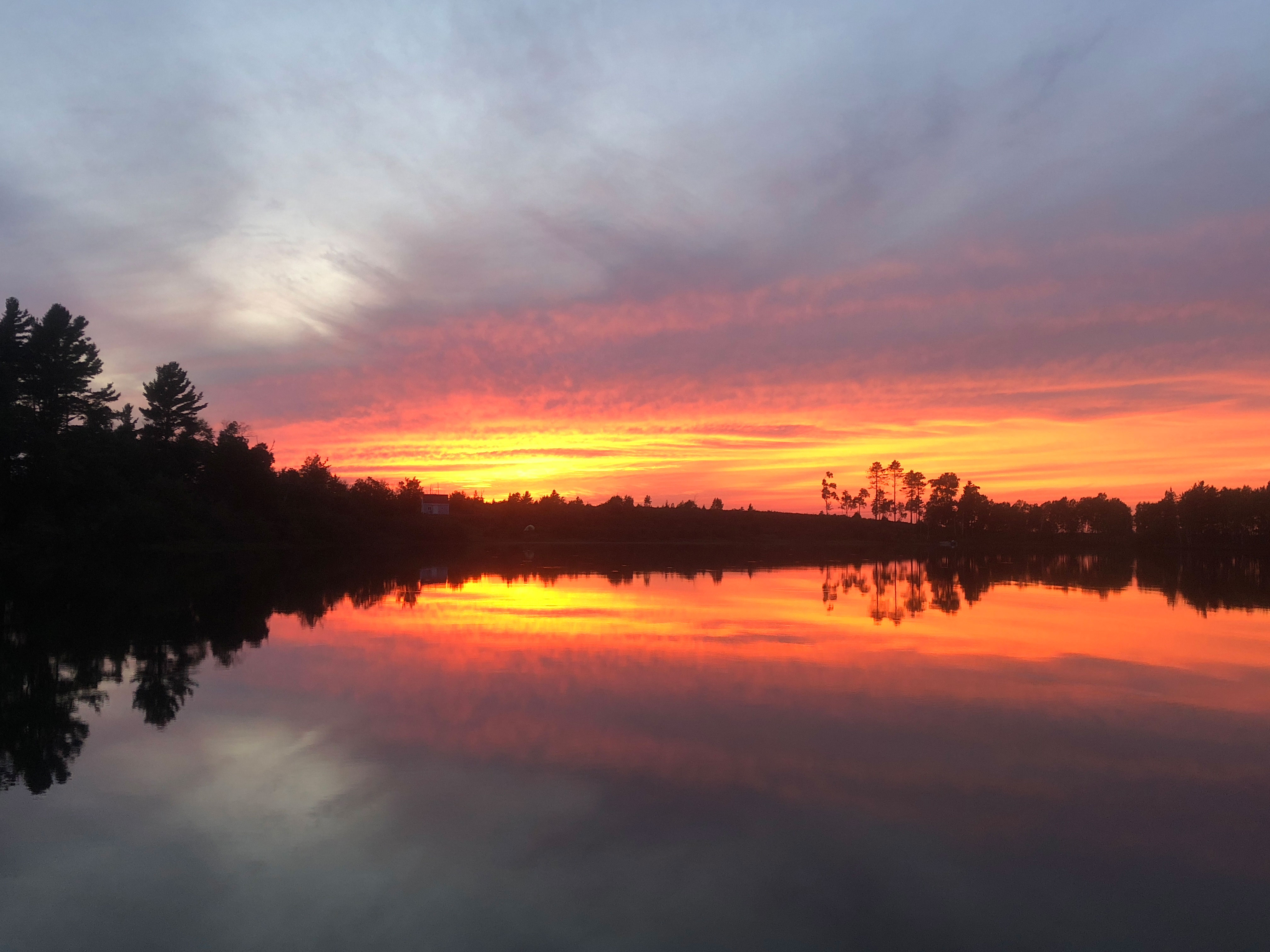 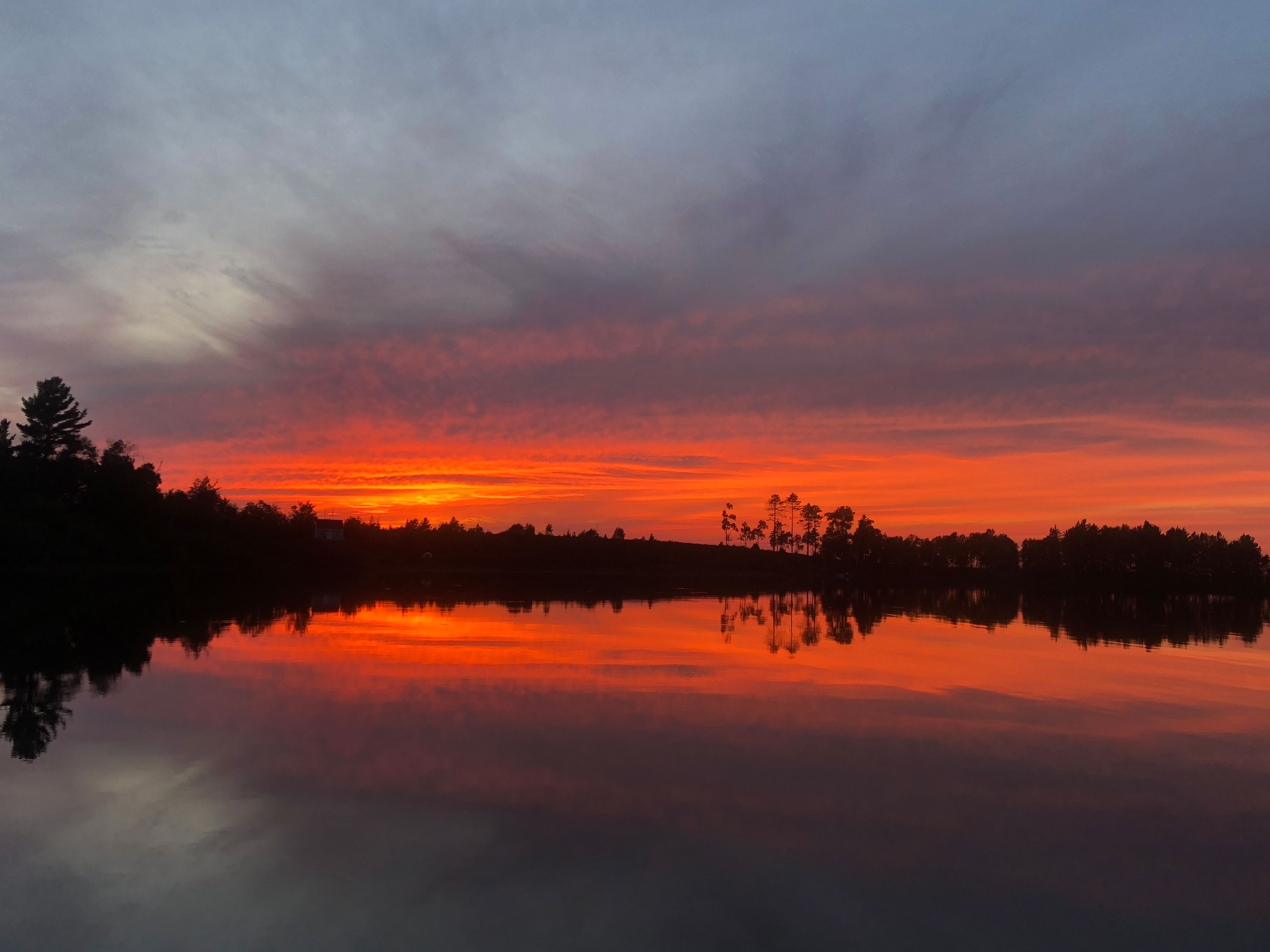 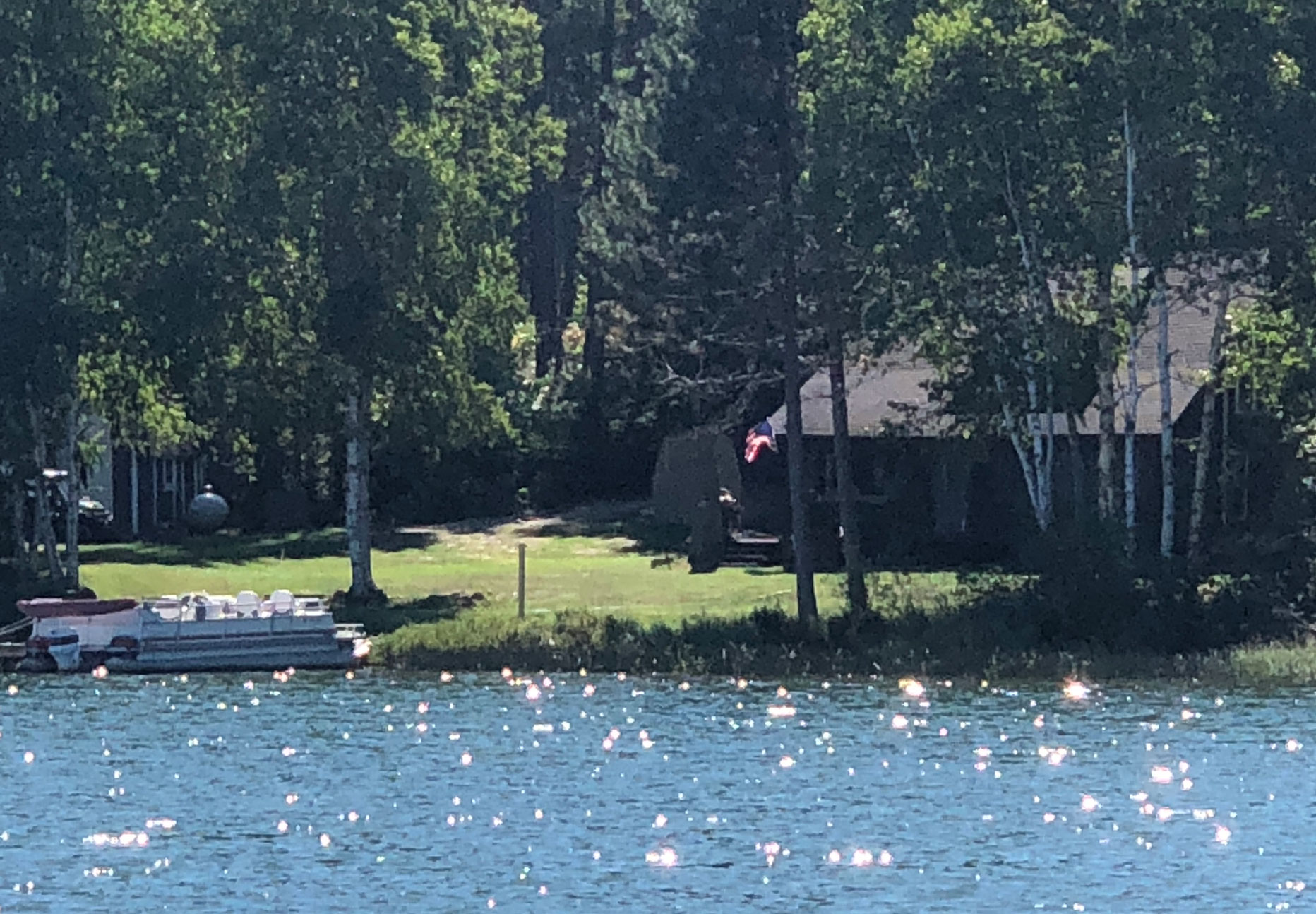 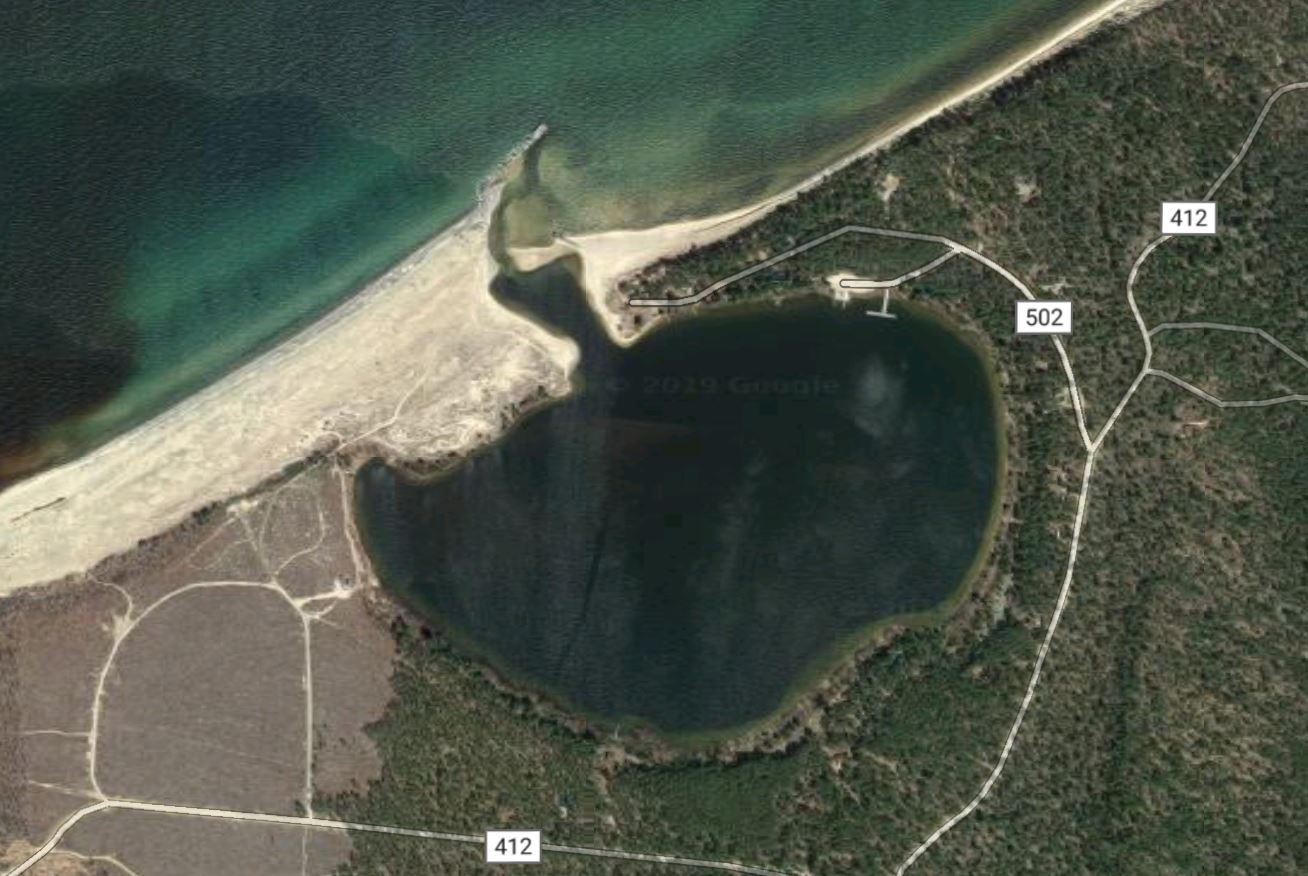 While paddling around in my kayak in Little Lake, I met a gentleman who owns a cabin called Temple Lodge. It actually shows on the charts with that name, which is unusual. The story he shared was that Temple Lodge was built by a wealthy bachelor for his soon-to-be bride. They called it the Temple of Love. Over time, its name was morphed into the Temple Lodge by more conservative thinkers.

From Little Lake we cruised to Whitefish Point. We got into the Harbor of Refuge only to find that the docks were all too short in length, too high, and in various states of disrepair. Not wanting to scratch the hell out of Gaviidae we opted to carry on, even though it was late afternoon.

Using the GLCC Harbor Reports I found an anchorage at the start of the St. Mary’s River in Waiska Bay on the Michigan side of the river–about 10 miles west of the locks of Sault Ste. Marie, MI and ON. The last glimmer of light had just dissolved by the time we wiggled our way in and dropped the hook. Wiggled was the operative word as we had to anchor between a long point and a submerged railway bed barely a hundred yards distant. Fortunately the GLCC Harbor Report guidance was good and we gratefully called it a night.

The next morning we headed for the Soo locks and said goodbye, once again, to Lake Superior. A little pain of sadness shot through as I realized it might be some time before we ventured back into the big lake. She will always be our favorite for her awesome beauty, the challenges she throws at those who ply her waters, and the amazingly safe hurricane holes she keeps tucked away along her shores.

From the Soo we continued down the St. Mary’s River stopping at a couple of anchorages along the way. During this time, we had been asked if we wanted to deliver a Gozzard 44 from Northport, Michigan to Goderich, Ontario. With a perfect weather window ahead of us, we left Gaviidae at the Duncan Bay Boat Club near Cheboygan.

Using taxis and buses, we made our way to Charlevoix, MI where we met Bernie Gros, who owns Lady Carol, the Gozzard 44. He brought the boat over from Northport to save us some time. Bernie gave us excellent instructions and we set off the next morning and made it as far as Duncan Bay on Lady Carol. With both boats there, we grabbed a few more provisions and clothes off of Gaviidae. It was a leisurely delivery as Bernie expressed concern about us going too far each day. Our max distance in one day was 65NM. With the sun shining high each day, it was one of the few times during the entire summer where it was warm enough to wear shorts!

We stayed in Goderich just long enough to do laundry before hopping in our SUV–which we had left at the marina–for the return trip to Gaviidae. Our rush to get back was for naught as the weather went south as soon as we arrived in Cheboygan. With winds so strong traffic on the Mackinac Bridge was shut down, we stayed put at Duncan Bay.

Monitoring the weather closely for two days, we finally saw a 24-36 hour window to get from Duncan Bay to Goderich. As soon as the first storm front passed, we headed out knowing that if we stopped anywhere along the way, we would be stopping for 4-5 days as the next big weather front came roaring in.

With the winds and waves in our favor we were able to maintain 7.5 to 8.5 knots for the first twelve hours. This was a combination of engine and sails, depending upon the wind speed. We arrived in Goderich 24 hours later after sailing 173 nautical miles. Tired, but happy, we made the trip with no issues or bad weather.

With that last hurrah, we ended our 2018 sailing season. In total, we logged 1530 nautical miles on Gaviidae from late June to late September.