After last year’s trip to California, we decided we would focus our travels and housesitting on the West Coast this year. We left Goderich October 1, did a short housesit in Milwaukee, stopped in Minneapolis and continued west. Rather than drive like maniacs, we opted for a more leisurely pace. Our first stop was Nevis MN to visit Neil and Elaine, my brother-in-law and his wife, and to check on our tiny property in the area. 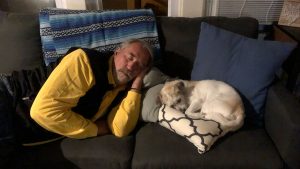 Cruising the Great Lakes means we have a limited sailing season. For the past five years we’ve been housesitting during the winter months and we’ve had some wonderful and crazy experiences. So far, we have taken care of 10 horses, 26 cats, 19 dogs, two bunnies and assorted fish. Crazy includes an escape-artist horse, cats who like to decorate with bird parts and toilet paper, and dogs who are, well dogs – with all the tail wags and face slurps they can muster. 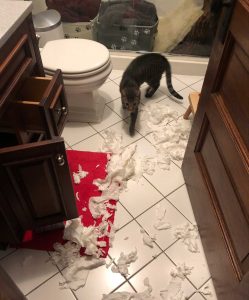 I was not looking forward to the drive across North Dakota; the Dakotas never seem to offer much visual stimulation. But big rains and snow had visited the area couple of weeks earlier and North Dakota was GREEN! Miles and miles of lush, rolling hills – who knew! Of all the times I have crossed the prairies, I’d never seen the Dakotas be anything but varied shades of brown. Not my favorite color.

We followed I-90 most of the way and managed to refuel the SUV at conveniently located Costco’s along the way! That also kept us well-provisioned with giant-sized bags of popcorn and red licorice – our typical road trip food. Along the way we listened to a John Sanford audio book. Sanford’s Minnesota-based crime novels are always a good read — or listen. And he’s a prolific writer. Dan thinks Sanford is well on his way to writing about a murder for each of Minnesota’s 10,000 lakes.

Heading west from Park Rapids we made pit stops in Fargo, Bismarck and Glendive, where we stayed overnight. The next day we stopped in Miles City and Billings, and overnighted in Bozeman. With snow forecast in the mountains, we raced across western Montana with a quick stop in Missoula. We ran into snow at the Idaho border. One of our favorite stops was Coeur d’Alene. If the weather had been better, we may have stayed a day or two. It was not a place to enjoy in a chilly downpour. We did go for a drive around part of the lake. I had just finished commenting that it would be lovely to find a bar with a view of the lake and a fireplace. Dan found both, just around the next corner! While enjoying lovely Manhattans, the bartender gave us some tips on where to go next.

We took the bartender’s advice and continued west the next day to Spokane, where we got off the Interstate and continued west on Highway 2 into the eastern slopes of the Cascade Range and the town of Leavenworth WA. Leavenworth had been a logging town and western headquarters for St. Paul-based Great Northern Railway. When GNR moved its headquarters elsewhere, the town re-invented itself as a Bavarian village complete with beer gardens, ski slopes, and hiking trails.

Just after check-in at the Icicle Village Resort in Leavenworth, we learned that Howard and Kerri-Ann, from Gaviidae 37 were 40 miles south of us. We opted to stay a second night and they joined us at the Icicle venue. We had been trying to cross paths as we were both heading west from Ontario and they were bringing a battery for our electric outboard. The battery was part of a manufacturer’s recall. With the battery hand-off complete, we explored the Disneyesque Bavaria-in-America, shared a few beers, hiked a local trail and dined together in the Icicle’s J.J. Hill restaurant.

From Leavenworth we continued into the mountains through deep gorges, over Stevens Pass and rain-swollen streams and rivers before getting to Whidbey Island via a short ferry ride from Mukilteo WA. The unincorporated community of Greenbank was our destination and our first housesit on the West Coast. We were greeted at the home by the owners, who were extremely welcoming. They departed the next day and left their home and two cats in our care.

Their home is located on a bluff above Admiralty Inlet, the strait between Puget Sound and the Strait of Juan de Fuca. It has spectacular views of the Olympic Peninsula and of the southern end of Canada’s Vancouver Island. Ships transiting into or out of Seattle can be seen all day, and their steaming lights can be seen at night. Facing west, the house has amazing sunsets.

The view was so spellbinding that we didn’t venture out much – it was just too nice! Our sightings included a pack of deer that cruised through the yard on a daily basis. We also saw quail, eagles and fox. During the day escorted submarines and other U.S. Navy ships cruised through the straits. Fishing trawlers and pleasure boats — including sailboats — were regular sights. There is a nearly constant stream of freighters and tug-pulled barges heading to or from Seattle. Using the MarineTraffic app on my phone, we were able to identify the ships, where they came from, and how fast they were going.

Anacortes and a Diesel Class

I learned of a one-day diesel class for women through Cruisers College in Anacortes and signed up immediately. The class was a great introduction as to the various systems tied into the diesel and which systems were most likely to be troublesome.

Another advantage of my trip to Anacortes was that I got to see Deception Pass and a bit of the town of Anacortes. Enough so that when our next housesit let us know their departure date had been pushed back a few days, we opted to head north to Fidalgo Island for a little exploration. Our first stop was Coupeville for breakfast and to explore the town. The sunny day gave us a perfect view of Mt. Baker.

We stopped at Deception Pass and hiked to the top of the summit (Goose Rock) where we were rewarded with an amazing view of the area before crossing the bridge to Fidalgo and on to Anacortes.

We had booked a room at the wonderful Nantucket Inn bed-and-breakfast and spent our time in Anacortes wandering through the stores, walking the docks looking at boats, and exploring some chandleries chock full of old and new seafaring items. Amazingly, we did not buy anything!

We left Anacortes and took the ferry across to Port Townsend, another very “boatie” place and spent another afternoon wandering through the town. Our next housesit was about 30 miles away so we made note of the stores, fish markets and the local farmers market schedule as we knew we’d be back.

With that we proceeded to Port Ludlow, which is where we are now taking care of two great pets: a large Norwegian Forest cat named Oscar, who acts like a dog; and an English Springer named Riley, who is just a happy boy! The home sits on the west shore of the Hood Canal, tucked in among tall cedars and pines and abundant ferns and other greenery. As with the prior sit — almost within sight across Admiralty Inlet! — I suspect we will just enjoy the view of the mile-wide Hood Canal with the Cascades looming behind Kitsap Peninsula across the channel. This is a very special place which greeted us on our very first morning with loon calls!

Loons in the Pacific Northwest–who knew!