Watching fireworks over the water has been part of my life for as long as I can remember. We would pile onto the pontoon with a load of sparklers and LaBatt’s beer for my parents (Dad was Canadian) and head down to the end of Long Lake where we had perfect viewing of the fireworks in Park Rapids, a couple miles west. As many as 30 pontoons and other boats would turn out, floating around in 130’ of water. For an encore, the various resorts around the lake would shoot off their own fireworks giving a full 360 degree experience. As far as I’m concerned, small towns do a much better job with the “whole” 4th experience making it a full-day festival.

This year we landed in Munising, Michigan along the southern shore of Lake Superior in time for their 4th celebration – and celebration it was!

Along the waterfront park there were miniature carnival rides for the little kids, a pavilion set up as giant galley cooking an endless supply of roasted chicken, and games that you only find in small-town America. Really. I mean have you ever heard of chicken poop bingo? Or roulette with a mouse? As to the former – yes if the chicken poo’d on your number, you won. And it was obviously a crowd favorite as there were at least 50 people cheering on the chicken. Poor bird was scared S#&%less – but I guess that was the point.

We did catch the pet parade with dogs and kids dressed up in themed costumes. Following the pet parade was a water fight between groups of the local volunteer firefighters. I missed the fine print that this required audience participation as the firefighters took great pleasure dousing the entire crowd much to the delight of the screaming kids who came prepared in their swimwear.

For our part, we tried our best to stay out of the line of fire but when they opened up the big water cannon on one of their trucks we got drenched. Thankfully it was a very warm sunny day and our phones were in waterproof cases.

All of this is just a lead up to the main event – the fireworks! Now unlike Grand Marais last summer where the debris was falling down on the boats in the harbor, Munising must have more cautious lawyers on the payroll. While our boat could stay at the dock, we had to leave as they fired the display off from the break wall. We were fortunate to meet a fellow sailor and his daughter who were going out in the harbor and invited us along. It was just like being on the pontoon except that we replaced the sparklers with glasses of wine. Such a sacrifice!

Now besides the events of the 4th, we did get to explore a bit of Munising while we were there. Highlights included biking to Munising Falls and Sandy Point.

Since our bikes take up some valuable real estate on the boat, it was nice to put them to use burning up a few calories. And it was a beautiful day for a bike ride!

Speaking of calories, if you’re in Munising you have to try Johnny Dogs – never thought I’d rave about a hot dog but these were exceptional. The restaurant is more like a food truck that lost its wheels and then expanded. There is a large canopy where they roast whole pigs for the pulled pork and the only real sitting area is part of a restaurant next door.  Oh, and you have to try the local Jilbert ice cream – we found it at the Falling Rock coffee shop where we spent the better part of a morning capitalizing on their free wifi. They also have exceptional breakfast wraps.

After having a wonderful time in Munising, we departed on the 5th for Grand Marais, Michigan. Unlike last year when our trip to Grand Marais was shrouded in fog, we had a glorious sunny day and got to see the beautiful Pictured Rocks and giant sand dunes along the shore. A visual feast the entire way. So blessed. 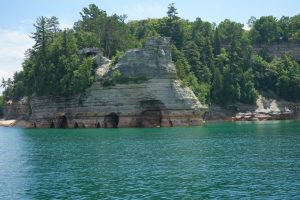 Our next jump targeted Whitefish Point and the Harbor of Refuge located there. Whitefish Bay can be ominous (think Edmund Fitzgerald) and we wanted a good weather window to make the trek. We left Grand Marais on July 7th heading east. As we got closer to Whitefish we checked numerous weather reports and decided that we needed to keep going or we were going to get stuck there for several days with some unfavorable conditions. As our next destination was Batchawana Bay on the Canadian eastern shore, we opted to keep going and met up with our friends Dave and Margaret on Steele’n Time in time to raft up for the evening, have some adult beverages and call it a day. Just a short 70NM day!