We are approaching mid-June and Gaviidae is still inside waiting impatiently for us to finish our various boat projects. The Loon is ready to jump in the water, yesterday. She really does not care about the finishing touches that are not quite done yet, she just wants to splash!

So, what are these projects that are holding things up? Probably the most obvious to the casual observer is the addition of a hard dodger or navy top as some call it and a hard bimini. The latter required a re-design of the stern pulpit and that rather large structure was delayed by the stainless steel fabricator in Michigan and didn’t arrive until mid-May while I was sailing in the BVI.

Like so many boat modifications, one project then leads to numerous other mandatory projects. My use of “mandatory” is subjective as other sailors may have gone ahead and splashed the boat and finished the subsequent projects at the end of the season. Not us. Especially when the new bimini and dodger made our existing cockpit enclosure obsolete. Mandatory? That would be yes, when you live aboard and sail late in the season when then the warm weather has headed south.

As soon as I returned from the BVI my priority was the enclosure. And since I’ve never made one or really made anything even close, the task was a bit daunting. I watched Sailrite videos until my eyes crossed and even had Dan watch some so he would understand what I was doing and could assist as needed.

With scissors and hot knife in hand, the first cuts were made in the canvas and the ridiculously expensive Strataglass (the clear vinyl for the windows). I started with the front section or windscreen figuring that was the most important section in regards to weather/water protection. Amazingly, it went quite smoothly. With Dan as my fabric sous chef, I got all three panels done in 4 incredibly hot days. Then the temperatures dropped and I learned how finicky Strataglass is when the temperature changes.

My sections which had been perfect in the warm temperatures were suddenly too small and we couldn’t get the bottom connections on. Sometimes you have to improvise and, in our case, Dan took our very small portable heater and turned it on next to the windscreen. Voila! The entire panel grew the appropriate ½ inch and the problem was solved. 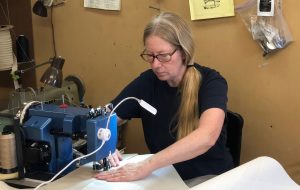 While I continued to work on the various enclosure panels, Dan had his own list of projects to complete ranging from installing new filters around the AC units, replacing the lines that hold up the swim platform, installing the various wood pieces that we re-finished over the winter and addressing countless other items that had to be completed before Gaviidae moved out of the Gozzard factory.

Did I mention that I’ve never made an enclosure? This lack of experience led to me underestimating how much fabric I needed, the number of zippers (I forgot about the zippers that I needed for the bug screens – oops), etc. So, I placed another order for supplies from Sailrite and Dan drove to Port Huron to fetch the shipment along with a number of other packages. But once wasn’t enough and I’ve had to place a second order! ARRRGGHH!

My initial success was replaced by some total bonehead moves where I cut the Strataglass too small or aligned zippers incorrectly. I became well acquainted with the seam ripper and since I have two, Dan helped rip out my mess ups.

Sometimes delays are outside of your control. Getting the back arch installed was one of those out-of-our-control situations. To expedite the sewing process, Gaviidae had been backed up right next to the stairs going to the sail/canvas loft inside the boat factory. And it was extremely convenient. Until it was time to raise the very heavy stainless arch/davit structure onto the boat. For that, a lift was needed but Gaviidae was parked 8 feet too far back to use their lift.

Not a problem, right? Just move the boat forward. Except that a forklift was parked in front of the boat and decided to die right there on the shop floor. Right smack in front of Gaviidae. So, over a couple of weeks, Mike Gozzard tore the beast apart and got it operational. With that, the Loon got 8’ closer to the door and water. She’s starting to pull on her stanchions.

The back arch/davit system went up, then it went down, then it went up, then down as the necessary welding adjustments were made to ensure a snug fit. I had patterned one of the back side panels but had held off on cutting the Strataglass or the canvas – a little voice kept telling me to hang tight. Good thing as the various adjustments to the arch changed “something” and the result is a pattern that is a bit askew.

Which brings us to the current timeframe. The arch should be done completely in the next day and they will leave it up long enough for me to completely pattern the backend. Dan gets to make one more trip to Port Huron to pick up, dare I say, the last Sailrite order!

Rumor has it that Gaviidae will get to go swimming on Monday.