Sometimes you do things just because you can. There is no logic, no monetary reward – just the satisfaction of saying “we did that”. Crossing the 49th parallel was one of those silly bucket list items for us – but it had to be done via the water.

What is the significance of crossing the 49th? Nothing really unless you are on the Great Lakes and then it becomes the furthest north you can sail to on fresh water. The 49th loosely defines the border between Canada and the United States per the Oregon Treaty of 1846. At least the border from Minnesota to British Columbia.

To put a little icing on the cake, the town of Nipigon (pronounced Nip-a-gan) will provide a certificate, signed by the Mayor, to all boaters who venture as far north as their little town. Once we learned about this, suddenly crossing the 49th landed on our “bucket list”.

With charts in hand, we boldly ventured forth navigating our way through rapids and shallow waters. Okay, that’s not quite true. We use electronic charts and our path was comfortably plotted out over a glass of wine. Rapids – um, no. There was a slight current but the wind was on our stern the day we ventured north negating the current. As for the shallow waters, definitely-but there are well-placed buoys marking the channel and we were able to maintain 20-30 feet of water most of the way.

We officially crossed the 49th Parallel at 1:32PM on August 7th, my birthday.

Hailing the marina in Nipigon, we were advised to stay a certain distance away from the channel markers due to shoaling from the ever-flowing river. A very helpful marina manager assisted with our docklines and other necessary services. His salary should be subsidized by the local tourism board as he provided us with a wealth of information about the town, where to find things, where to eat, etc.

And he returned with the official certificate signed by the Mayor indicating we had crossed the line!

As we were just getting settled and getting the boat back in order, we heard a knock on the hull. Since boats don’t have front doors, knocking on the hull is the polite alternative. Popping up from below decks, we were delighted to see our friends Larry and Judy from Minneapolis. They had arrived in the area early for the Red Rock Folk Festival.

After catching up on all the news, they departed and we headed into town with our mountain of laundry. When I said mountain, we had not done laundry in four weeks! That’s how long we had been away from civilized luxuries like a washer and dryer. While waiting for laundry, we took turns riding our bikes around the town. Nipigon is a tiny town, a 15-minute bike ride and you’ve seen everything!

Dan killed another 30 minutes in the LCBO (liquor store) chatting with an elderly woman who had married a Dampier, the name of the delightful anchorage where we had stayed a week earlier. Her family had also built the cottage along the shore of Cozens Cove on Michipicoten Island. We anchored there one night in 2016 and made use of their sauna that was tucked behind the cottage. She assured Dan that it was perfectly fine that we had used the sauna!

I Got the T-Shirt

We hopped on our bikes the next day to get the final provisions we would need for the upcoming week. Dan had been warned that the LCBO in Red Rock was closed due to a pipe burst so replenishing the beer and wine supply was mandatory. We also took the time to explore the Nipigon museum which was very interesting and free! As a bonus I got a t-shirt stating I had “Crossed the Line” for a whopping $7 Canadian!

We returned to the boat, paid our bill at the marina where our boat length had been a bit of a discussion. The fee is based on the length of the vessel and the manager was adamant that our boat was no longer than 39.9 feet! In fact, our boat is considerably longer but I was not about to argue the point and instead purchased mini Nipigon Nylons to hang on our equally small Christmas tree. We cast off our lines and headed 4 nautical miles south to Red Rock and the Red Rock Folk Festival crossing the 49th one more time. 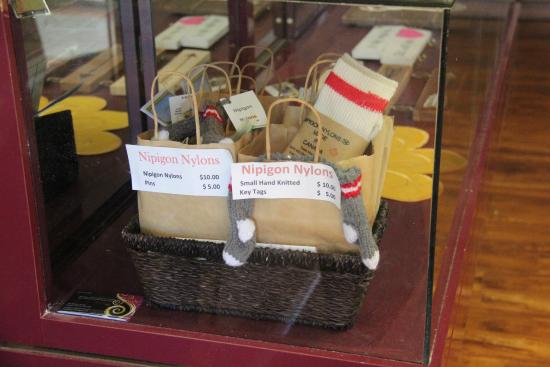