When Eric Thomas (Barker’s Island Marina) learned that we had a virgin chute, he insisted that we fetch it and test it out. He grabbed one of the crew and we headed out into the bay. The winds were 7-8 knots, light enough that we wouldn’t move much with our mainsail and genoa. With his crew at the helm, Eric took us through the steps to launch the big balloon. He also showed us how to stuff the sail and on my first attempt to bring it down, it came down so fast I dropped my arse onto the deck. 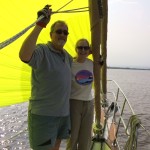 The sail is absolutely huge with a bright green lightning bolt running through the middle – and as soon as it went up, Gaviidae lurched forward like a horse breaking free from the gate. Eric also showed us how to ‘jibe’ with the chute – no easy feat as you have to stuff it and then wrestle the sail around the genoa furler. Best to use the chute when you can make one long run in the same direction.