We joined the Great Lakes Cruising Club in 2014 – it only made sense that we join a sailing organization that is focused exclusively on the most wonderful fresh water sailing anywhere.  Since joining we’ve attended a number of events including mid-winter parties, a summer rendezvous, etc.

We met some fabulous people along the way and their insights, aid, and guidance have been invaluable. Last summer we started using their famous harbor reports and found them to be great guides for little hidey-holes and safe anchorages. In an effort to “give-back” we considered applying for a Port Captain role. A Port Captain is supposed to be an expert in a given port or anchorage and be able to provide assistance to those who pass by. That’s a little hard to do when the boat you’re on is moving all the time!

With a little encouragement from Rear Commodore Dewey Flynn and Past Commodore Niels Jensen, we decided to apply. But first we had to have a PORT! Well there was this one place along the eastern shore of Lake Superior that has very strong memories for both Dan and me: Old Dave’s Harbour at the west end of Otter Island. And yes, in Canada harbour is spelled with a “u”—they often put a “u” after an “o” because unlike some countries in Eastern Europe that have a deficit of vowels, our northern neighbor is one of the world’s leading producers of vowels, hence harbour and colour and, yes, even neighbour—which gives U.S. spellcheckers heartburn.

Old Dave’s Harbour is the place we did a hard grounding on shoals when we tried to enter the harbour. This single event was the most stressful situation we dealt with all summer. With evening approaching (along with a storm), it took us two hours to get off the rocks. Who said memories had to be positive?

We ended up there for three days due to the weather. It was windy, rainy, and the waves crashing along the outer shore of Otter Island were impressive. We spent the days hiking through the brush, picking blueberries, admiring the now automatic lighthouse and exploring the abandoned Lighthouse Keepers house and marveling at the old boat cards (think business cards passed out by boaters) tacked to a bulletin board in the house. If you missed our original blog about Old Dave’s Harbour, click here.

Very few people make it to this remote little spot. The log book showed only one other visitor there for the entire summer. A new log book is needed at the location – and since we were planning to visit Michipicotan Island this next summer, what’s another 35 miles further north to get to Old Dave’s?

So we applied to become Old Dave’s Harbour Port Captains and we were accepted! Oh – did I mention that having a Rear Commodore sponsor you might go far in persuading the powers that be. So what does this mean for us? How will we “give back?” For starters, we will be able to update some of the wonderful harbor reports – hopefully this will help those who follow.

And as I was pondering our new assignment as Port Captains this morning, I realized that while we may put a new log book in the Lighthouse Keepers house – seeing who visits this wonderful spot in the future will be difficult at best – unless we can get a helicopter to drop us off! There is a helipad next to the lighthouse. So we are going to create a virtual log book for Old Dave’s and we will ask those who stop there to take a picture of themselves in Old Dave’s Harbor and send it to us at gaviidaesails@gmail.com along with details as to who they are, the dates, the name of their vessel and what they did while they were there – the usual log book stuff. Here is the link to where the pictures will be posted.

Our adjusted sailing itinerary now includes a stop at Old Dave’s in mid-July where we can post our own boat card on the wall along with the official GLCC Port Captain sign. And if it’s calm enough, we’ll take more soundings so that future travelers to Old Dave’s keep the rocks in their drinks. 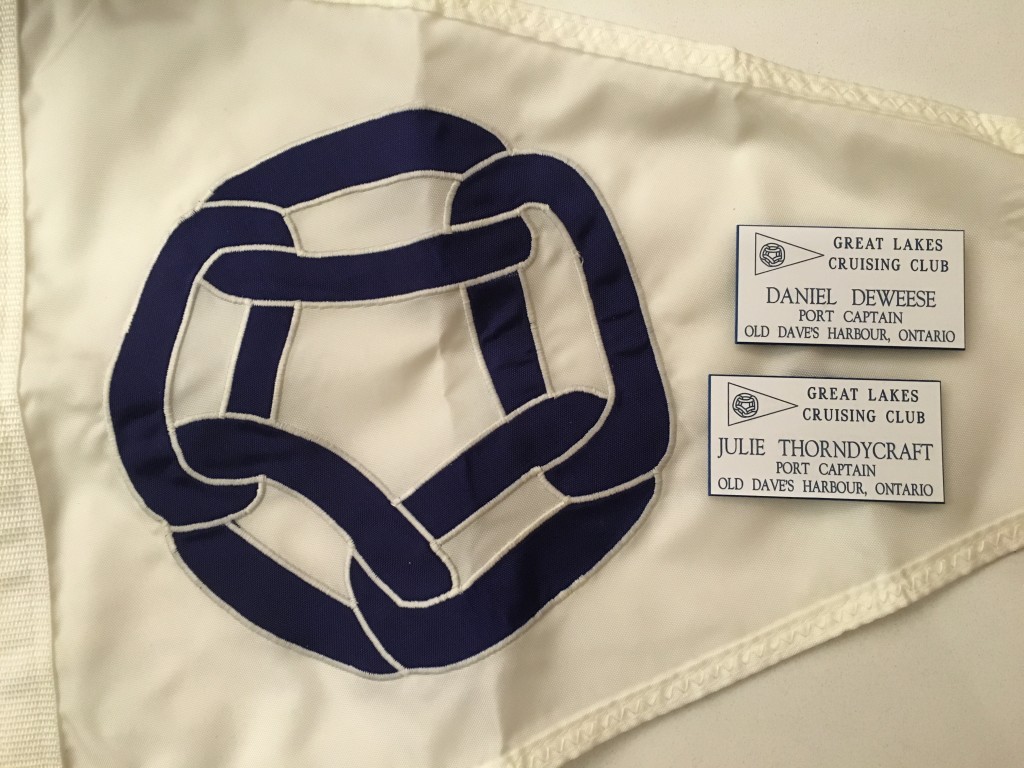