We arrived in Woodbine Harbour on Simpson Island after a short cruise from Rossport, ON. The route we took was not particularly familiar, although I had previously sailed thru these parts back when we still had the Blue Loon. A friend and I trailered the Loon to Rossport and spent several days exploring the legendary islands and gunkholes I had been hearing and reading about for years.

I was also motivated to sail the area by the story of the Republic of Nirivia. Nirivia was the name given to a fanciful attempt to establish a North Woods version of the so-called Conch Republic, aka the Florida Keys. Would-be secessionists in the 1980s had discovered that St. Ignace, Simpson and other islands making up the archipelago protecting Nipigon Bay from Lake Superior had never been legally claimed by Canada. My understanding is that some wags from Nipigon actually wanted to establish the republic to protect this beautiful and pristine wilderness area from mining companies, railroad interests and other nefarious enterprises hell bent on uprooting trees and leveling mountains.  Nirivia never gained any traction, but I think the Canadian government was prompted to clarify its dominion. When I asked the mayor of Nipigon about Nirivia a couple years ago at a boat show he scoffed that the whole thing was an American concoction—or at least perpetuated by Americans.

Julie and I entered Woodbine Harbour late in the afternoon and proceeded into a narrow finger that ends in a classic reedy moose marsh complete with the music of a babbling brook or small waterfall that can be heard 50 yards out. As I went forward to drop the anchor, I turned to ask Julie for depth readings and was struck by an intense déjà vu. I had been in this harbour before. On my previous trip to the area, I had anchored the Loon and tied off to the same shore. I think I ended up tied to the same tree—a bright green tamarack.  I only recognized the location when I turned and beheld the massive tree-lined dome that loomed above the larger bay. My friend and I spent our last night in Nirivia here before steaming back to Rossport, hauling out and driving back to Minneapolis.

Unfortunately, Julie and I did not take pictures of this gorgeous little enclave until the next morning. The massive green dome is lost in the mists of fog in the photos we have. Otherwise, the accompanying photo would closely echo a picture I took of the Loon before the fabled Republic of Nirivia was lost in the mists of time.

Video of Gaviidae at Woodbine 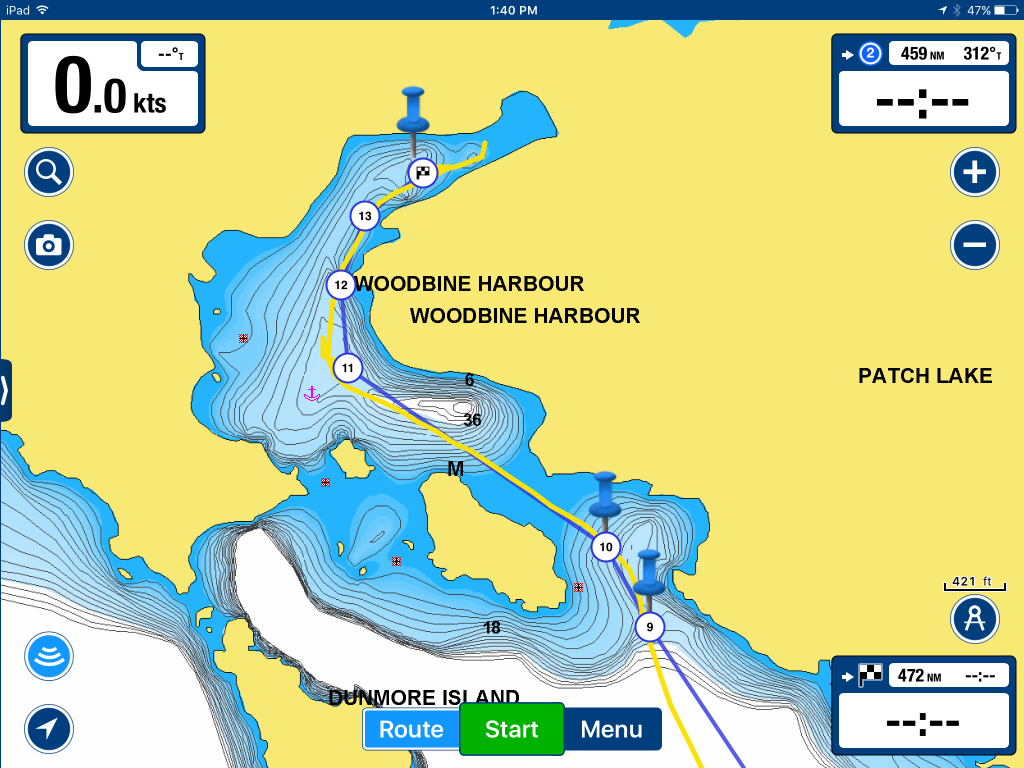