As a kid growing up on the American prairie in the mid-20th Century, seafood was a rare and exotic commodity. It’s a long way to either coast from South Dakota. We were occasionally treated to shrimp—tiny pink things from a bag in the freezer, complete with freezer burn. Yum! Not. I don’t recall ever seeing clams or salmon or halibut on my dinner plate. I was, however, somewhat familiar with oysters, of all things. Oyster stew was served for dinner on New Year’s Eve. It was a tradition that was never explained, and I never asked about it.

Oyster stew wasn’t my favorite meal. The oysters were grey and slimy looking; they were about the size of a half dollar and looked like something hacked up in a coughing fit. They had a weird briny smell, and they always came out of a large can.

I never tasted these oysters other than as slightly rubbery globules in a steaming butter-and-milk stew floating among bits of onion and celery and little round crackers. My brother and I both thought the oyster crackers were the best part of the meal.

Oysters in the Midwest

My brother says oyster stew was a New Year’s tradition in our mother’s family. She grew up with oyster stew in rural South Dakota and continued the tradition because Dad liked it. Oysters have a long culinary history in America. They were already a dietary mainstay among East Coast Natives when the Pilgrims arrived. Abundant and easy to harvest, oysters were prized for their nutrition and flavor. As American settlers moved West, so did their taste for oysters. Barrels of oysters in seawater were packed in ice and straw and shipped by rail on tracks newly lain across the prairies. That explains how my ancestors stuck in the middle of North America had access to coastal shellfish.

Besides nutrition and flavor, oysters have long had a reputation for promoting fertility and libido, two important factors in a developing nation with a growing population. Coincidentally, New Year’s has been celebrated with fertility rites since at least the Roman Empire. So, oyster stews helped “stir things up” in little houses on the prairie on cold winter nights.

Anyway, holiday traditions can be tenacious. I’ve never made an oyster stew, but 25 years ago I came across a baked oyster dish in a recipe book from the legendary Seattle seafood restaurant, McCormick and Schmick’s. It wasn’t a stew, but the recipe included sautéed oysters returned to their shells and immersed in dilled butter cream with Champagne and topped with a dollop of French brie. It reminded me of my parents’ oyster tradition, so I started making it as an appetizer for the New Year’s celebrations we either hosted or attended in our neighborhood in suburban Minneapolis.

I hadn’t made Oysters Melanie for years but spending the Holiday Season on the Mendocino California coast inspired me to revisit it. I adjusted the recipe to work as the main dish along with a salad for New Year’s Eve. Warm crusty bread replaces the oyster crackers of my youth, but when I make this oyster dish, I’ll always remember New Year’s Eves with my parents and their oyster stew. 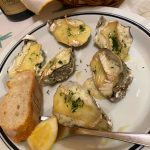 Substitute: You can substitute 1 Tablespoon chopped fresh tarragon for the dill for stronger anise flavor.

Preparation time: 20 minutes (depending on how fast you can shuck oysters).