Julie and I immediately seized on the idea of a Mexican-inspired dish. We just happened to have a Costco-sized bag of tortilla strips on hand. For those of you who do not frequent Costco or some of the other warehouse shopping clubs, nothing you buy comes in small quantities. This bag of chips required a forklift to get it out of the warehouse and to the SUV, where we loaded it onto a U-Haul trailer. On arrival at Pikes Bay, we recruited half a dozen sailors and dockhands at the marina to get it aboard Gaviidae. We stashed the bag o’ chips in a portside locker, immediately setting our 37-foot, 19,000-lb. boat at a 30-degree list. After three weeks of living cattywampus, we decided the GLCC event was the perfect opportunity to reduce our stock of chips.

After a little last minute research, I found a promising recipe by celebrity chef Paula Deen on FoodNetwork.com. She called the recipe Macho Nachos. I figured that with her reputation for excess, something called Macho Nachos would be perfect in the quest to help right the boat.

I already had most of Paula Deen’s recipe ingredients on hand, but had to run to the store to get some cilantro—I was fresh out–and canned chili. I do not recall ever eating chili from a can in my adult life and approached the idea of buying canned chili with considerable trepidation. But I had neither the time nor the inclination to make a batch of my Paha Sapa Chili Grande. I bit the bullet and bought the chili.

Julie and I put this recipe together quickly in our galley, then marched it over to the PSM clubhouse a little late. Half of it was gone in about 15 minutes and all but a sliver was consumed by the 20 or sailors at the end of the happy hour. For some of us, the nacho appetizer was dinner. In short Macho Nachos were a hit.

They also put a dent in the bag of tortilla strips; the boat now only lists 20 degrees to port. 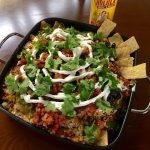 Next time I make this, I will coat the bottom of the pan/platter with some oil, then lay refried beans across the bottom. Doing this should make it easier to dip the nachoes with tortilla chips.

* You can substitute the canned jalapenos with 1 fresh jalapeno, sliced crosswise, plus extra for garnish