Greeted with a fine, clear morning, Julie and I cast off from the service dock in front of The Sportsman’s Inn in Killarney a little before 8:30. Our destination was Tobermory, about 70 miles southeast of Killarney. Gliding down the narrow, straight channel that divides Killarney proper from George Island we were astonished to see a collection of small seaplanes on the lawn in front of the Killarney Mountain Lodge. They were scattered around like the toys of some neglectful kid.

The vast sweep of Georgian Bay opened up as we passed the Killarney light at the east end of the channel. Swinging to starboard we soon found a favorable 8 knot wind coming out of the west over George Island. The day was looking up. With a 70-mile run ahead of us, the prospect of getting an assist from old Aeolus, the Greek god of winds, filled the sails of our hearts.

We immediately unfurled our genoa and motorsailed for a couple of hours. As we cleared the south end of George Island at noon the wind swung to the southwest. We decided to take advantage of the wind change. Raising the main and unfurling the stay sail, we altered our course and destination. Our destination changed from Tobermory on the northwest corner of the Bruce Peninsula to Wingfield Basin, an anchorage on the remote northeast corner of the Bruce. The locals refer to this as Cabot Head. 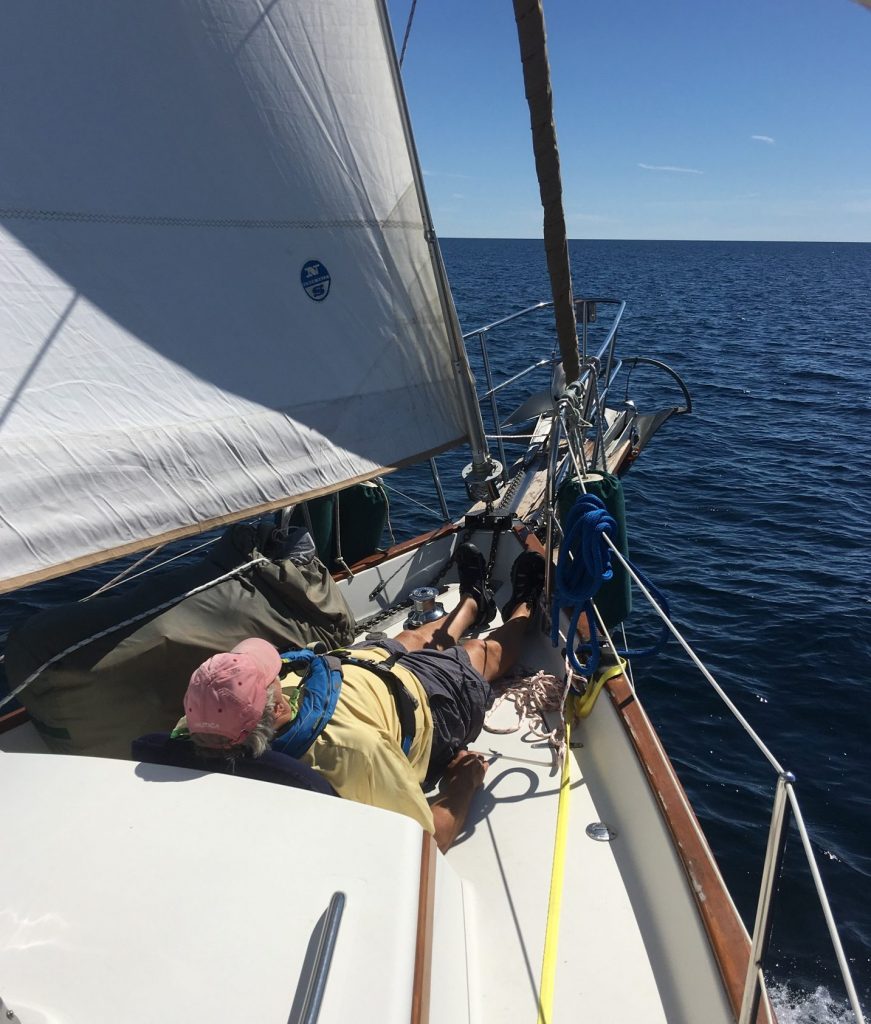 We enjoyed a grand afternoon sail doing 6-to-7 knots under clear blue skies decorated with high cottony clouds. When we arrived at Wingfield Basin, the sun was still well above the horizon. This was good since the entrance to the anchorage is narrow and shallow. Julie perched on the bow pulpit to watch for any uncharted hazards. While I called out readings from our depth finder, Julie provided an ongoing narrative of what she could see ahead.

We typically don our SENA bluetooth headsets whenever we anchor, weigh anchor, dock or enter an unknown channel. The headsets dispense with having to shout information nearly 40 feet down the length of our deck. They also free us from relying on hand signals, which can be problematic with a mast and boom partially blocking the forward view from behind the wheel in the cockpit—not to mention potential difficulties interpreting flashlight signals during maneuvers in the dark. (Now doesn’t that sound like the title for a racy song?) We got the SENAs from Cruising Solutions after running aground at Otter Island last year. Earlier incarnations of these marvels of modern communication were actually branded “Marriage Savers.” These SENAs have lived up to that reputation for us. Anyway, we glided incident-free into the cozy anchorage and dropped a hook with enough daylight left to enjoy a leisurely swim in the crystal-clear water before prepping dinner.

Another sailboat was already anchored in the area our GLCC harbor report suggested. As there was still plenty of room we dropped our hook some 50 yards away from the other boat. We parked across the reed-lined cove from a rusty old shipwreck just offshore from a home with a massive satellite dish. The house was on a gradual elevation just south of the entry channel. The rest of the bay has little or no elevation, but three tall tree-lined hills stand sentry to the south and to the east. Telephone poles—an unusual sight on anchorages we have visited the last couple of years–run along the southeast shore.

Unlike other anchorages where we have socialized with baymates, we had no contact with the other boat or the residents ashore. We caught a couple glimpses of the apparently solitary sailor. Although lights came on after dark, we did not see anybody at the house until we prepared to leave the next morning.

After deciding to head southeast along the north side of the Bruce Peninsula to Lions Head—about 18 nautical miles away—we awoke to a gorgeous color-streaked sunrise.

Winds were up and we anticipated a nice run under sail. Rounding the northeast corner of the peninsula we passed the historic lighthouse perched on the rocky shore to warn sailors of nearby shoals. Then the winds shifted to our nose and we were beset with hard one-to-two meter waves and swells pushed across the long, long fetch of Georgian Bay. We pounded against the wind and the waves for about 20 minutes before deciding to turn around and head west to Tobermory.

That proved to be a nice leisurely sail and we arrived in the quaint tourist town early in the afternoon.