On the second morning after arriving in Loon Harbour, we awoke to a bright but hazy sky. A breeze out of the southwest was just strong enough to orient Gaviidae toward the channel between Spain Island and Borden Island. That channel leads to a wilderness sauna we planned to use. We had backed into the mouth of the channel when we anchored, facing northeast. Although Spain’s shoreline sometimes seemed uncomfortably close to our rear port quarter as we swung slowly at the end of 80 feet or more of chain, we were satisfied that we were in 10 feet of water. We had initially nosed into the channel to verify depths with our depth meter.

We remained pointed away from the channel all the next day, but shifting overnight winds pushed us some 80 feet beyond the anchor. That second morning we found ourselves facing the channel. Winds had been high enough in the intervening time to move our 22,000-pound keel boat 160 feet or so from our original position, dragging the chain to its entire length on the other side of the anchor. If our 55-pound Mantus anchor unstuck from the bottom once Gaviidae reached the end of the chain in the opposite direction, it had likely rolled and reset—just as it was designed to do.

Julie and I discussed visiting the sauna and firing it up before departing. A nice relaxing sweat sounded like a good idea. Our planned destination that day was Porphyry Island (pronounced “pour furry”), a place we had never visited. Less than 20 nm west/southwest from Loon Harbour, it is at the end of the chain of islands that reach southwest from the peninsula that separates Nipigon Bay from Black Bay. Loon Harbour is roughly halfway down that chain and Porphyry was maybe 3 hours away at 6 knots, our usual motoring speed. If there was enough wind to warrant unwrapping a sail or two, it might take another hour or so.

A recent Great Lakes Cruising Club harbor report about the island described a small harbor that included a short dock. Main attractions noted in the report included the historic lighthouse—dating from 1873 and no longer in use–and outlying buildings, including two lighthouse keepers’ houses. Hiking trails crisscross the island and views of the Sleeping Giant are additional draws. The report also indicated that dock expansion was underway and a sauna was being built and expected to be complete early in the summer of 2018. That last bit of intelligence settled the question about our departure: we could sauna at Porphyry.

We fired up the engine late in the morning after the usual systems checks and motored out of Loon Harbour, waving goodbye to the crews watching us on Mirage and Nokomis. We were happy to see a loon pop up as we started to swing around the north end of Spain. Loon sightings always make our day.

We faced light and variable winds as we made our way southwest, picking our way between the series of islands and their outlying shoals and rocks. Approaching Porphyry Island we entered the channel between it and other islands to starboard—including the much-larger Edward Island, we started hearing excited radio chatter on our VHF. A boat somewhere ahead of us was working its way through shoals and rocks that litter the channel a third of the way down Porphyry Island. Someone on shore was talking the skipper of the boat through the still, but nonetheless treacherous channel. It was clear to us that the skipper was not quite following the guide’s directions. At least not to the satisfaction of the on-shore Samaritan who presumably knew the channel well.

A short while later, as we rounded a point along the shore, we could see a dock with some people standing on it. Other boats, including a sailboat, were tied along the far side of the dock. We quickly discovered that the sailboat was Oasis II. Its crew, Paul and Julie, were among the party on the dock. This was our third encounter with Oasis II since we met them just a couple of weeks earlier at Otter Cove. It was weird to keep running into them. There are a lot of anchorages available along that section of the Canadian shore.

We slowed our pace and chatted briefly with Paul on the radio. He told us they knew the owner of the dock and the cottage on shore. The dock owner was not there, but other mutual friends were. One of them, the man whose voice we had heard earlier on the radio, knew the channel well, according to Paul. Paul urged us to heed his friend’s navigation advice to dodge some upcoming obstructions and turned his handheld radio over to our new guide.

The trickiest part of the channel began mere meters past the dock. A tiny islet and some satellite rocks and a shoal were visible ahead. Several rocks and another shoal marked on our Navionics chart were not currently visible in the water. Normally evident at chart datum, they were now under water as Lake Superior was a couple of feet higher than when navigation charts were last updated.

We came close enough to a couple of submerged rocks to give our guide heartburn, but we negotiated the hazards without the radio-transmitted histrionics that accentuated the passage of the previous boat. We thanked him for his help and got a little additional advice about skirting another island ahead. He also described the best approach to Porphyry Cove and what to watch for inside the bay.

The dock in the cove was already crowded with boats when we cruised in, so we made for the unoccupied mooring ball at the end of the harbor. We were relieved not to have to raft up to one of the dockside boats. A large cruiser was tied at the outside end of the dock, extending several feet beyond the dock. It turned out to be Always Sunday, with our friends Pat and Mary from Duluth! We took a couple of rangefinder readings and decided to eliminate the chance that a wind shift might swing our stern toward Always Sunday’s starboard quarter. I rowed ashore and secured Gaviidae with our tie line to the shore, thereby eliminating a potential proximity perturbance.

Safely secured we rowed ashore, chatted with Pat and Mary, then arranged for a guided tour of Porphyry Point and its famous lighthouse. The island is a designated provincial park and nature reserve. Trails, buildings and construction–including the dock, boathouse, sauna, lighthouse and peripherals–are looked after by Canadian Lighthouses of Lake Superior (CLLS), a nonprofit group that works on restoration and maintenance of lighthouses and attendant buildings from Thunder Bay to Sault Ste. Marie. Porphyry has the most ambitious program in the CLLS portfolio. Short- and longterm volunteers live on the island in the summer season working on trails, painting and repairing or even restoring buildings and acting as docents for visitors. Visiting the island and getting a tour is free, but CLLS signs suggest donation amounts for guided tours or use of the docks and sauna. The guides, mostly college students, will accept tips.

Our docent was a college student who had been there all summer. We walked the half-mile trail from the harbor to Porphyry Point on the west end of the island. This is where the lighthouse, two lighthouse keepers’ homes and a couple other buildings are located. She escorted us up to the top of the 53-foot-high lighthouse with its expansive view that includes the landmark Sleeping Giant ridge on Sibley Peninsula 8 nautical miles west and Isle Royale 11 nm due south.

Our guide also showed us into the fog alarm building which now houses the Gordon Graham Gallery, which showcases historic island artifacts and photos by the island’s last lighthouse keeper, Gordon Graham. Graham was an accomplished photographer. The museum also features a gallery for the artist-in-residence program offered by CLLS. CLLS allows artists to reside on Porphyry during the summer, sharing quarters with volunteers in one of the old lighthouse keepers’ houses. A second lighthouse keepers’ residence has been restored as a guesthouse for paying visitors. 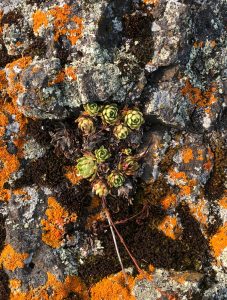 Julie and I explored the rocky point and got our first close look at the igneous rock that gives the island its name. Porphyry is formed from cooled volcanic magma known as basalt that is riddled with feldspar and quartz crystals. Porphyry colors range from gray to black to brown. Besides the crystals which usually present as off white, the basalt often contains iron, which rusts and creates rusty orange blossoms on the face of the rock. The island’s rocky point includes a helicopter pad and bright red Adirondack chairs positioned for optimal views across Black Bay and Lake Superior.

The location of the chairs seemed a bit odd at first until we realized that our phones suddenly came to life accessing a signal from the mainland. A lovely spot to relax and catch up on a few emails. The red chairs have been placed at a variety of locations by Parcs Canada and have become a “destination” quest for kayakers and hikers. While we may call them Adirondack chairs, the proper term is a Muskoka chair.

On our way back to Gaviidae, we stopped by Always Sunday to visit with Pat and Mary. We were joined by Julie and Paul who had arrived while we were touring and tied Oasis II to a spot that had opened on the dock.

Always Sunday left early the next morning heading to popular Thompson Island. Julie and I hiked across the island to an amazing black rubble beach strewn with all sizes of porphyry. When we returned, I untied our line to shore, checked the boat’s systems and released our mooring line. Like Always Sunday, we were also headed to Thompson Island. As we passed the dock, Oasis II pulled away from the dock and followed us out of the cove.

Then we realized–we forgot to sauna. 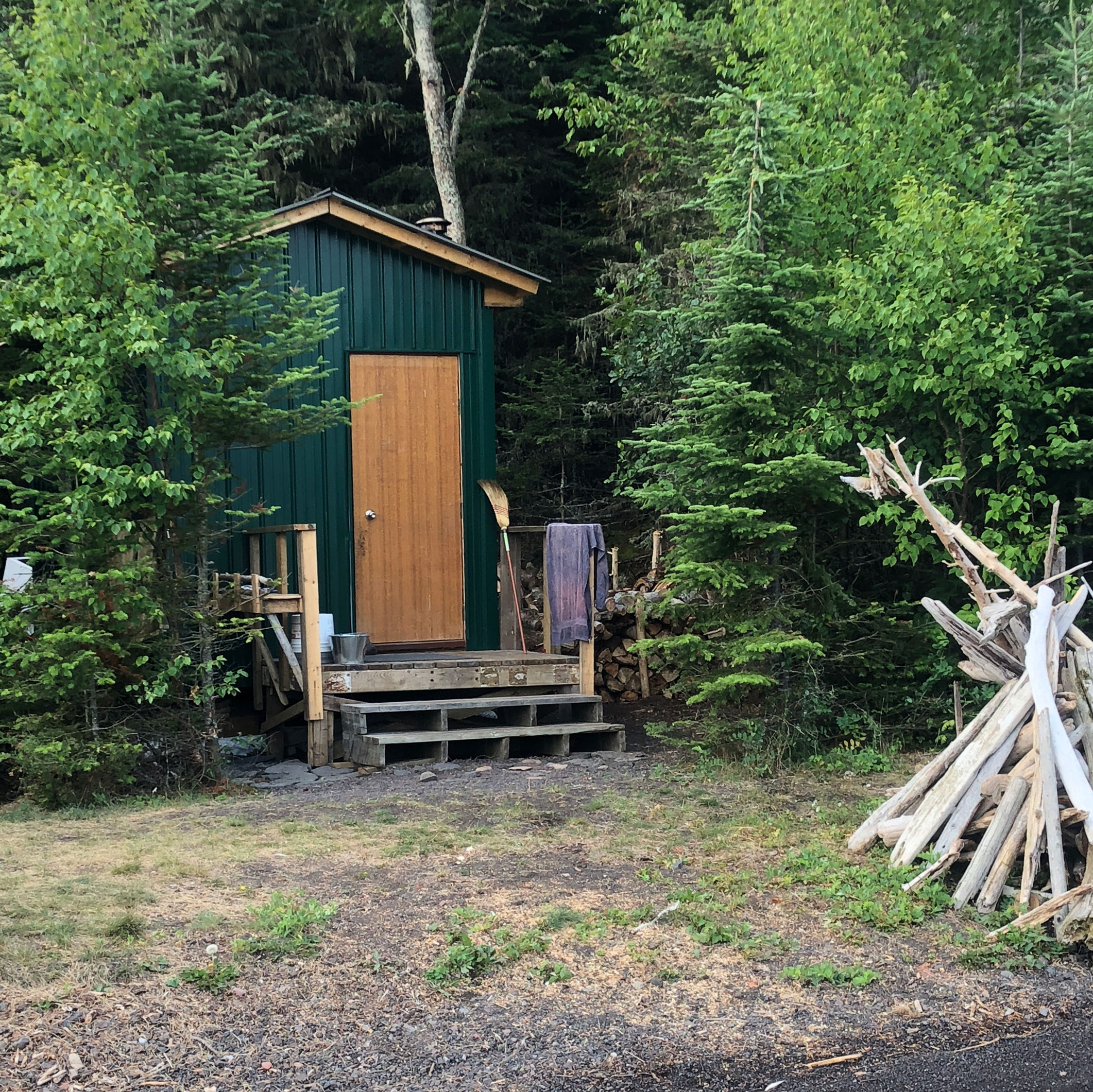 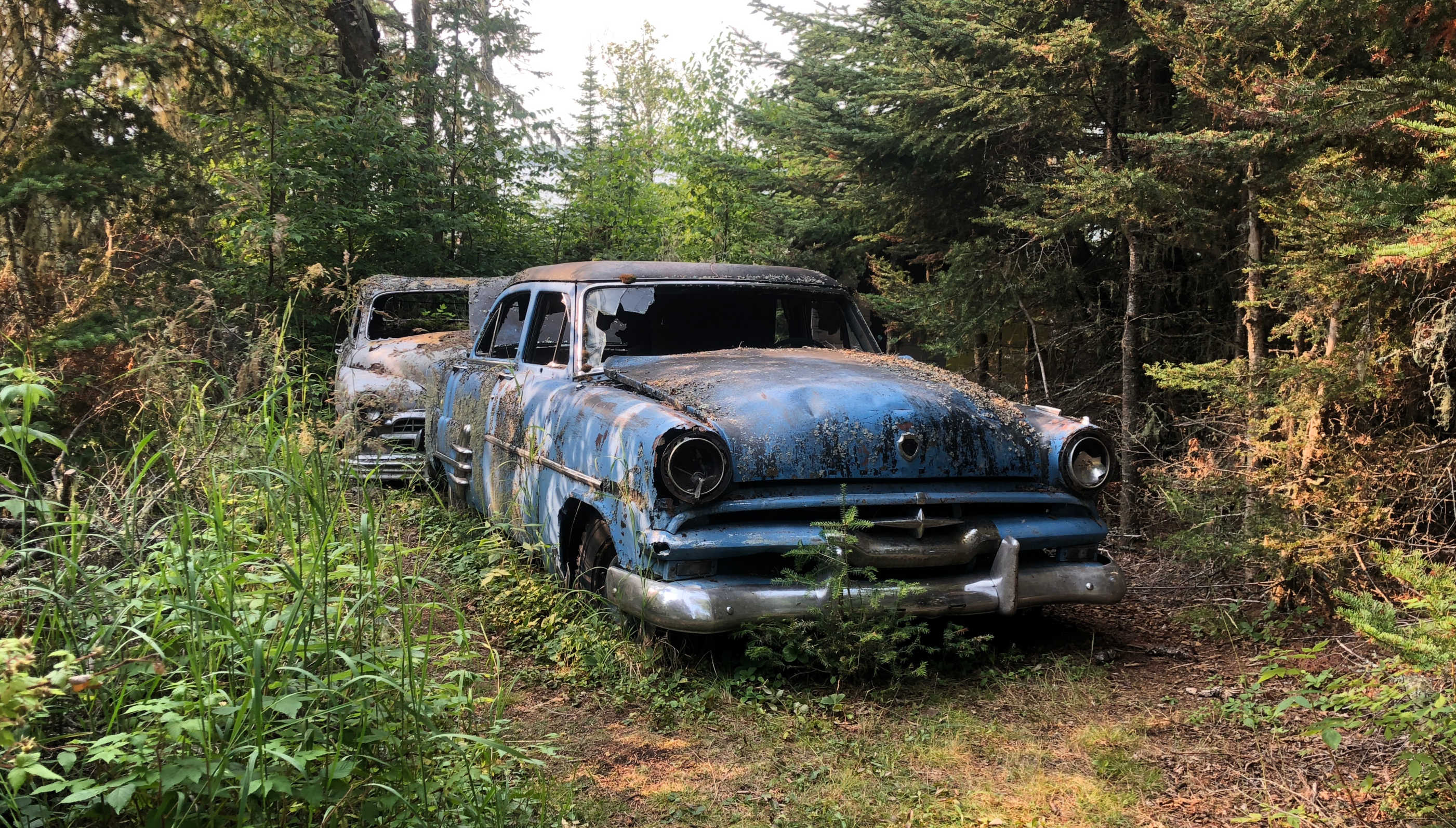 August 13 Why are there cars on an island with no roads? 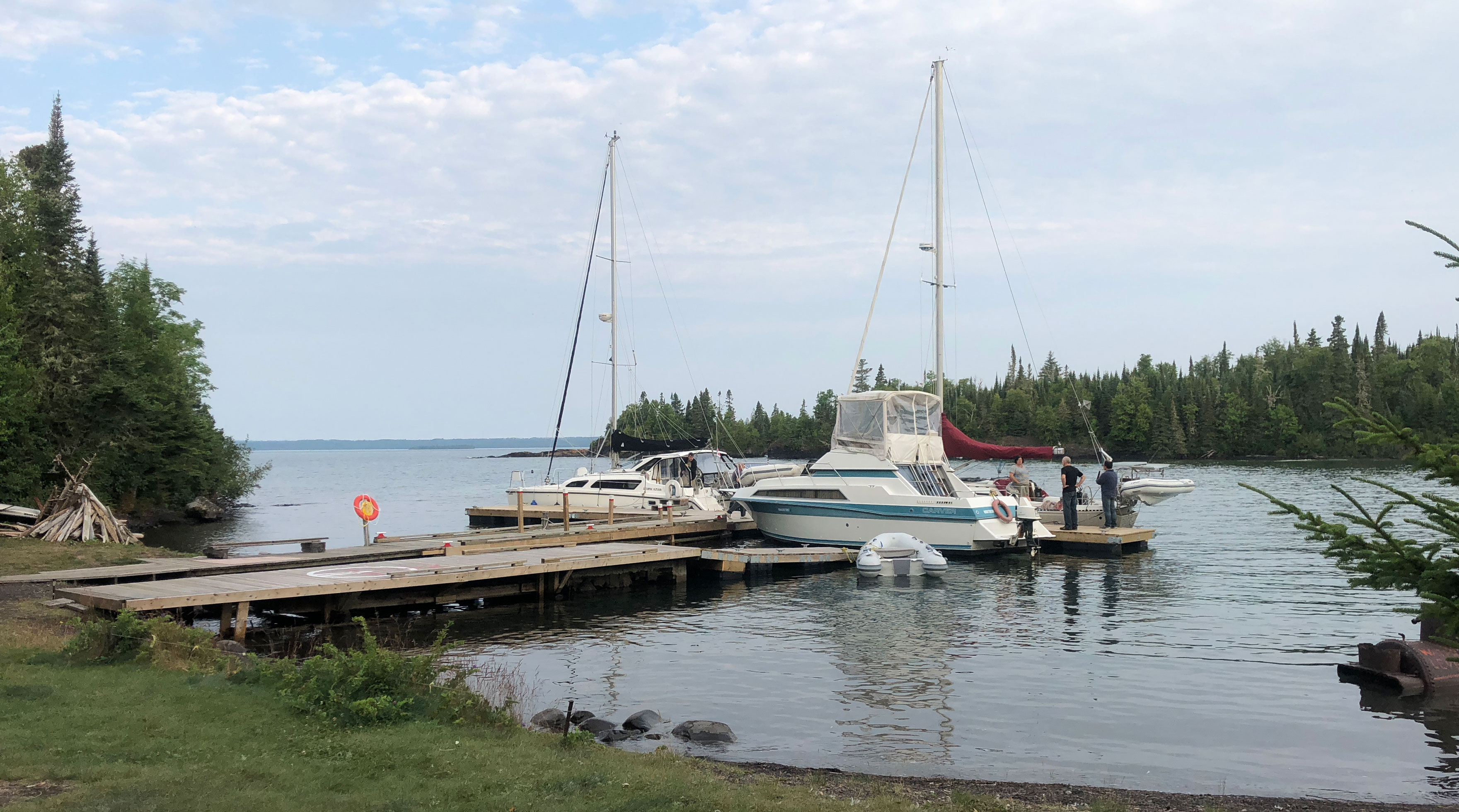 August 14 The docks at Porphyry 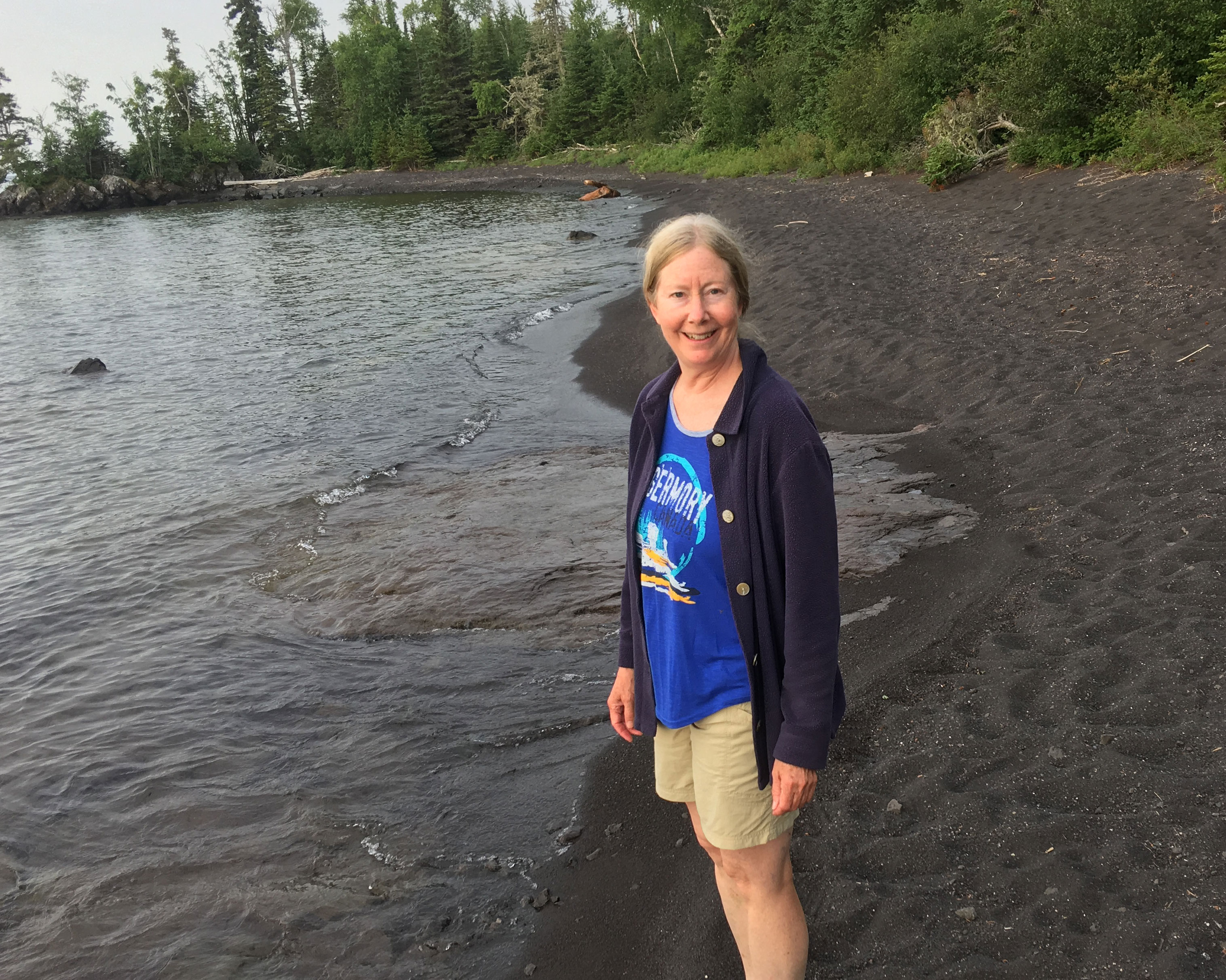 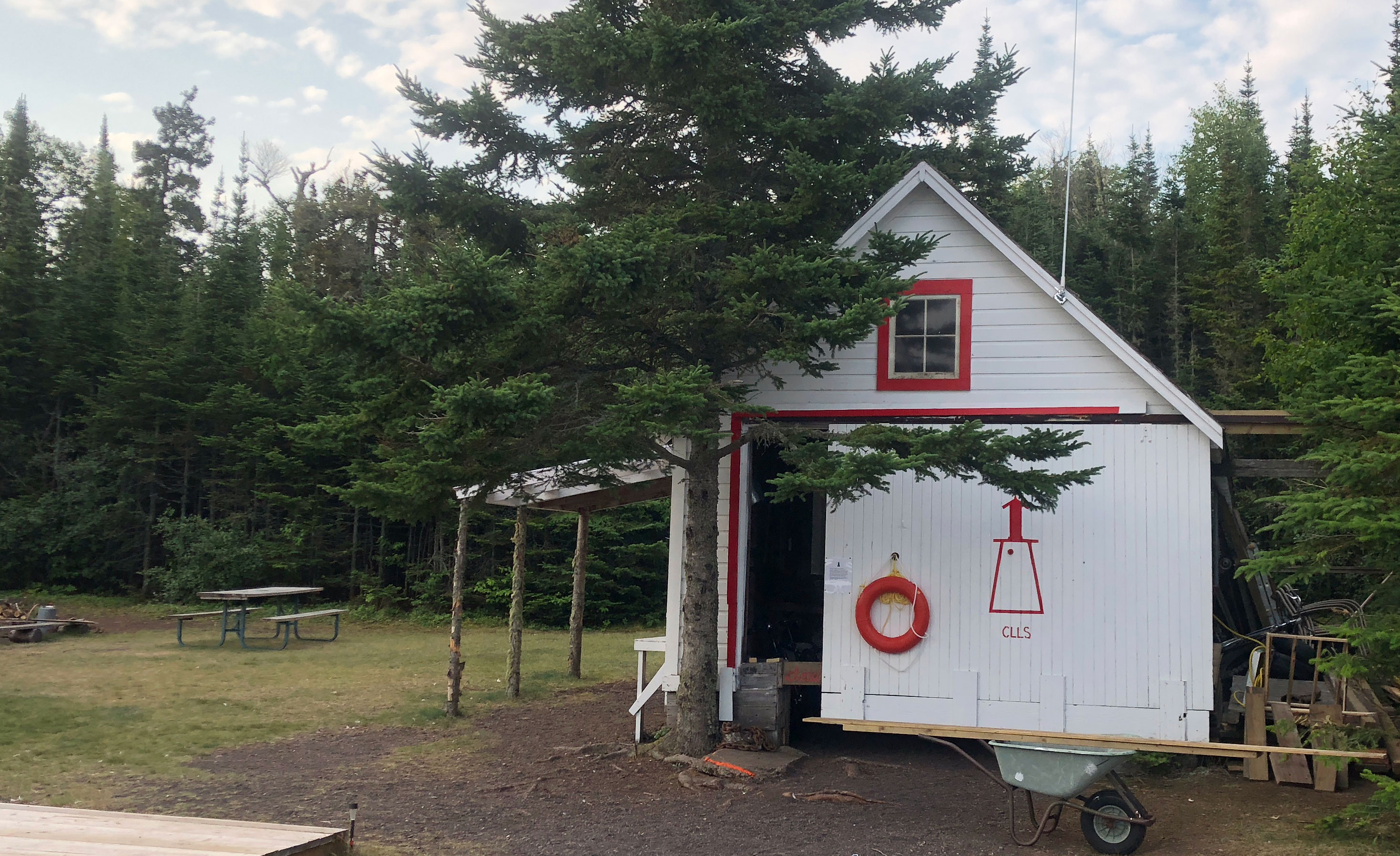