As we steamed out of Porphyry Cove making way for Thompson Island some 23 nm to the southwest, s/v Oasis II followed us out. They in turn were followed by their friends on the catamaran who had guided us down the channel to the cove the previous afternoon.

With an eight knot breeze out of the northwest, Julie and I considered raising sails. By experimenting with points of sail in lighter winds this summer we were delighted to learn we could augment our speed and/or reduce fuel consumption by throwing up some laundry in breezes under 10 knots. While we weren’t ready to try out for the America’s Cup, our 24,000-pound sailboat responded better than expected in light air. Our discussion ended when we saw sails bloom on Oasis II a mile or so behind us.

Nosing into the wind we unfurled all three sails. Swinging back around to the southwest, eight knots was enough to encourage us to cut our engines on this close reach. We glided along with just the sound of water singing past our hull to break the silence. There is a gratifying sense of calm and satisfaction when you can see your sails fill with the same wind you feel on your face. A wind that gently pulls your vessel along. It’s a sailor’s greatest joy. That’s how we crossed the entryway to the Montreal Channel, and continued south of Sibley Peninsula at the feet of the Sleeping Giant dozing under a nearly cloudless, but hazy sky.

We cruised at 5 knots under sail for about half an hour when the wind faltered and our seafaring bliss evaporated. It was all too brief, but we were happy to have had our first real sail in several days. Reeling in our genoa we fired up the diesel. After an hour of motorsailing with our main and the staysail still deployed, the wind began to build again but shifted to our nose. With resignation we furled our flapping sails back in and motored the rest of the way.

Thunder Bay and the Giant

The smaller, but lighter Oasis II motorsailed past us on a more westerly course while we were still under sail. She ultimately disappeared into Pie Island, which straddles the entrance to Thunder Bay, the massive body of water that gives its name to the city of Thunder Bay, Ontario. The mouth of Thunder Bay is some 14 nm across, measuring from the lighthouse at Thunder Cape on Sibley Peninsula to Wyllie Point on the bay’s western shore. The bay, roughly shaped like a parallelogram, stretches from Wyllie Point 30 nm to its most northeastern point at the top of Sibley Peninsula. Originally called animikie (thunder) by the Ojibwe people who inhabited the area, early French explorers called the Baie du Tonnere which translated into English as Thunder Bay. You have to wonder how the Sleeping Giant gets any sleep with all that thundering.

At about 108,000 people, Thunder Bay is the largest city on Lake Superior. (Duluth is number two at 89,000, but the Duluth metro area, including Superior, WI, is about 280,000—compared to 121,600 in the Thunder Bay metro area.) French fur-trading posts on the Kaministiquia River were established in 1683 for First Nation (native American) and French trappers–this was voyageurs country. French domination gave way to English and the trading posts were supplanted by Fort William (1803) and the Hudson’s Bay Co. a few years later. Declining demand for beaver pelts for hats in Europe (silk from the Far East became all the rage) coincided with declining beaver populations.

Growing cities in eastern Canada needed lumber for building, so logging supplanted the fur trade as chief economic driver in the area. As old growth forests were depleted, mining took over. The British built Port Arthur on the shores of  Thunder Bay in the 1870s, thereby helping usher in the rise of the shipping trade on the Great Lakes. The rival settlements of Fort William and Port Arthur were amalgamated in 1970; the newly combined city was dubbed, of course, Thunder Bay.

Immigrants from Finland were among the waves of Europeans who moved into the area to exploit its natural resources. In fact, Thunder Bay is said to include one of the two largest populations of Finns outside of the home country. (Toronto is the other claimant to that title.) The cultural influence of Thunder Bay’s Finnish population is widely given credit for the often-hidden rustic saunas scattered among the islands along the Canadian shore of Lake Superior from the eastern end of Michipicoten Island (Cozens Cove, visited and used by us in 2016), to Thompson Island—our current destination. Visiting Thompson Island, and partaking of its infamous sauna, was a key reason for this second circumnavigation of Lake Superior. It was on our bucket list.

The People vs The Government

Over the years we heard tales of the running battles between intrepid Thunder Bay sailors and the Ontario Ministry of the Environment, Conservation and Parks (aka, Ontario Parks) to develop a primitive dock and build a sauna on Thompson Island.

Thompson Island Provincial Park is a 3 1/2-mile long slip of hardened volcanic magma thrust from deep in the earth some 1 billion years ago. Located 14 nm south of the city of Thunder Bay, Thompson Island lays barely four miles off the mainland at its southern tip. Isle Royale lies parallel to Thompson Island 12 nm to the southeast.

Described as an “improved wilderness harbor” in a current Great Lakes Cruising Club harbor report, the improvements are limited to the cantilevered dock bolted to the rocky perimeter on the lake side of the deep, clear harbor, some picnic and camping structures, an outhouse, and the notorious sauna.

The amendments were made as recreational sailors out of Thunder Bay sought to make the island an outpost from their yacht club–much to the chagrin of Ontario Parks. Thompson Island is a designated provincial park, i.e., Queen’s Land. Ontario Parks is charged with preserving pristine wilderness areas within its purview. Therefore, development is discouraged on park lands. Like beavers intent on damming a stream, Thunder Bay sailors initially scavenged scrap wood and timber for the docks and sauna. Park wardens (aka, rangers) demolished the initial structures. Undeterred, Thunder Bay sailors brought wood and other building materials from Thunder Bay to re-build the dock, sauna, ladders and other structures. These, too, were promptly removed by park officials.

Lead by the sailor who initially recognized the potential in the island, Al Wray, the Thunder Bay sailing community would rebuild and the authorities would tear down. According to legend, it was a cycle that went on for several years. Eventually an accord was struck with the park service. No permanent structures are allowed, but docks, an outhouse and a sauna are tolerated by Ontario Parks as long as the amendments are maintained by volunteers. To that end, Thunder Bay sailors set up a “Friends of Thompson Island” fund to which visitors and supporters alike can contribute and keep the island’s amenities in good standing with Ontario Parks.

A high bluff near the northern end of Thompson Island is the landmark that guides visitors into the embrace of the small secure harbor known locally as Wray Bay. People arrive in kayaks, canoes, pontoon boats, fishing skiffs and sailing and motorized vessels of all shapes and sizes. It is also on the itineraries of commercial cruising tours out of Thunder Bay.

As we passed south of Pie Island our fabled Northwoods Shangri-La began to emerge from its mainland background. While Oasis II had long since disappeared, the catamaran remained behind us, apparently also steering for Thompson Island. I was happy at the prospect of not having to vie for dock space. I also began savoring the idea of firing up that sauna and finally enjoying a little Finlander culture.

After passing up two opportunities to sweat things out in rustic settings the previous couple of days, a long bake in the legendary sauna on Thompson Island would be the “Finn-ishing” cap to our westerly journey along the Canadian shore of Lake Superior. Not only was that sauna a much-anticipated goal of this summer-long excursion, Thompson Island would be the halfway mark. Afterwards we would begin heading south and east–back toward Lake Huron and Goderich, Ontario where this adventure began a couple months earlier. 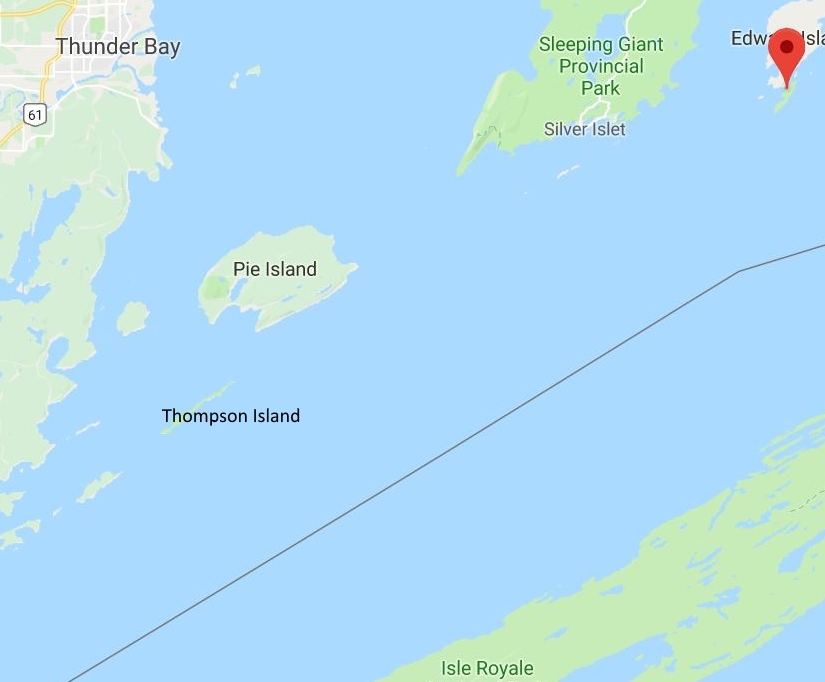